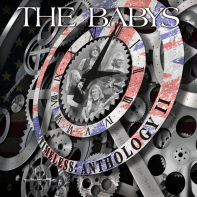 We've been working hard in the studio~ this time providing a blend of remakes from several of the classic hits, along with some recent tunes! Among some of the tracks are your favorites, along with some nice deep cuts that we will all enjoy. We have chosen to name it Timeless: Anthology II. We can't wait to share it with you all!

Stocker shared, "I personally think Timeless has a more distinctive sound to it production wise, mainly because the tracks all came from the same studio, unlike the first Anthology. I am very pleased that we managed to maintain that 'Babys' sound!"

Both Stocker and Brock are confident that this album will be well-received. "Some fans will never let go of the original versions, but I know a true fan will be open-minded enough to enjoy where we are now, especially with our incredible lead singer, John Bisaha (and other members)," Brock added.

Bisaha's presence and enthusiasm are both powerful on stage and behind the scenes. "We all bring something new into the making of this record, even Tony and Wally. There's a 'live' feel to this record. We've brought all the glitz and glamour with the arrangements and orchestrations," Bisaha stated.

Seasoned guitarist/songwriter Joey Sykes provides a new dimension and nuance, who shared, "The surprise is that The Babys actually recorded another greatest hits album. For hardcore Babys fans, and music fans in general, that's a great thing to have a few new ones that we put our stamp on."

The music of The Babys has withstood the test of time, with Bisaha concluding, "These songs are part of the storyboards of our lives. These songs are Timeless – and so – our album shall be titled as such."

The Babys are available for interviews and radio/TV appearances. Contact our Public Relations for The Babys at pr-team@thebabysofficial.com.

The recording of Timeless: Anthology II is taking place at Pacifique Studios in North Hollywood, CA, and is engineered by Ted Greenberg and produced by Tony Valenziano and Tony Brock.

On the Blue Cruise

Out of Miami, FL