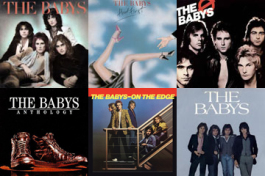 Born in 1976, THE BABYS took on the classic rock world head first with a full stage musical experience, giving rise to what quickly came to be known as their 'signature sound'. Billboard chart-climbers like "Every Time I Think of You", "Midnight Rendezvous" and "Isn't It Time" helped to launch them into worldwide recognition while also helping to carve out their permanent place in music history. THE BABYS were the first band ever signed to a million dollar record deal with Chrysalis Records on the basis of a 'new' thing called 'video'. THE BABYS classic songs have withstood the test of time - with their hits still being played in rotation around the globe, and influencing bands of 'the day' and emerging artists respectively. Rock radio DJ/music enthusiast Paul Nicholls of Feel the Steel on Platinum Rock Radio UK echoed that sentiment during his interview with THE BABYS in August 2016, stating, "Without The Babys being around, music in the 80's would've been a lot different."

After a successful run from 1976-1981, THE BABYS disbanded, but are thrilled to be back after a three decade absence! Co-founders Tony Brock (drums) and Wally Stocker (lead guitar) launched a nationwide talent search at the end of 2012 to find the right lead vocalist, additional guitarist, keyboardist and iconic Babettes to capture and complete the full richest of the classic sound of THE BABYS, which they found in lead vocalist/bassist John Bisaha, guitarist Joey Sykes, keyboardist Louis Middleton and The Babettes; Holly Bisaha and Elisa Chadbourne. Previous keyboardists have included Francesco Saglietti and Brian Johnson. 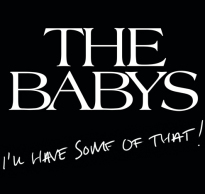 In 2014, the new BABYS released the album I'll Have Some of That!, which included 14 tracks blending the classic rock BABYS sound with a modern signature that has been critically-acclaimed by both the music industry and fans alike.  Fans may continue to purchase their copy of I'll Have Some of That! by clicking here.

In January 2015, THE BABYS released their first official video to coincide with the single debut for "I See You There", which went on to peak at #5 on Billboard's Hot Single Sales, and #6 on the AC Top 40 Chart. 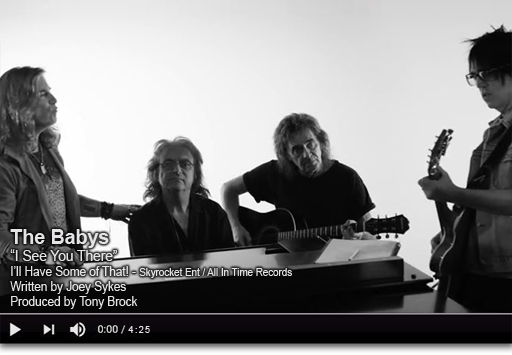 Since reforming, THE BABYS have played Rockin the Rivers, SunFest, Club Vinyl, The House of Rock, The Ritz and countless other venues across the country, garnering rave reviews along the way, including this comment submitted by Jeff Rudisill who attended their concert at RJ Reynolds Auditorium in Winston-Salem, NC on 8/27/16:

"Finally got to see you guys tonight in Winston-Salem . It was SO WORTH the wait!!!! Not only did you sound great, but with everyone smiling so much it's very clear that you truly love playing together. And it shows!!! Thanks for a Helluva Ride tonight and come back soon !!!" 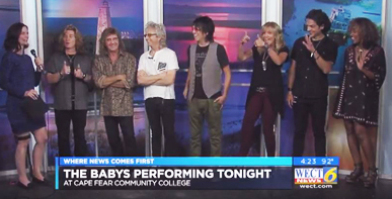 THE BABYS also enjoyed stepping back onto a live TV set for the first time in over 30 years when WECT News 6 in Wilmington, NC invited all members on-air for an interview! Click on the image to watch the full interview!

Be sure to catch THE BABYS upcoming live performances in your area! Isn't it time?!

TONY BROCK is one of the world’s most explosive and technically brilliant drummers. As a pro drummer since the age of 15, Tony’s playing credits feature a who’s who of world-class musicians.

Born in New York, JOHN BISAHA is a pure vocalist who has worked within various forms of the industry for years. John has been honing his chops from a very early age, from fronting bands to television sitcoms...

JOEY SYKES was born and raised in New York and currently resides in L.A. Sykes got his first real taste of the industry with the band Boystown. He signed a singles deal in England with EMI, toured and recorded several albums.

THE BABYS had some distinctive sounds in their DNA. From Tony Brock’s heavy drums, to Wally Stocker’s signature vibrato, none positioned them apart more than the unmistakable sound of THE BABETTES!