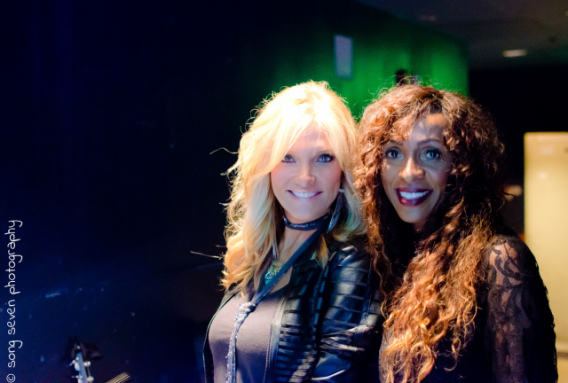 THE BABYS had some distinctive sounds in their DNA. From Tony Brock’s heavy drums, to Wally Stocker’s signature vibrato, none positioned them apart more than the unmistakable sound of The Babettes!

Holly Bisaha has sung and toured extensively as a singer and backing vocalist. She has won a Telly for her vocal work and for being a spokesperson for Chandon Champagne. Holly has appeared with such artists as Stevie Wonder, Huey Lewis, Frankie Valli, Simon Kirke, Ricky Byrd, and along side Elisa with Bang Tango and Azure Blue.  She is honored to be heard on the BISAHA EP, Joey Sykes’ latest LP, as well as many sessions at Tony Brock’s Silver Dreams Studios.

She is also passionate about educating children through music as Creative Director for MTAOC and OCTheaterworks. Holly feels truly blessed to be rockin’ as a Babette with THE BABYS! She has to admit, nothing beats the view from the back!

Elisa Chadbourne has also walked within many circles of the business. She has had numerous sessions with such artists as The Black Eyed Peas and Penny Ford. Elisa has also performed in the studio and toured with Bang Tango, Azure Blue and Christopher Williams, among others. Elisa has also fronted several acts including Chakra Band.